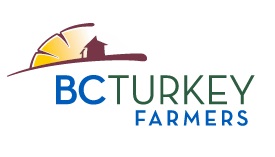 The BC Turkey Association (BCTA) was formed in 1951 under the Societies Act and was mainly a social venue for turkey farmers in BC. The BCTA is currently involved in the following Committees: Biosecurity, the Sustainable Poultry Farming Group, the BC Poultry Association, BC Agriculture Council and Emergency Response. The BCTA believes in giving back by participating in Ag in the Classroom and to the Union Gospel Mission with funds from the charity golf tournament that is co-hosted with the BC egg industry.

The BCTA represents 66 commercial turkey farms in British Columbia. In 2017, BC turkey farmers grew a total of 25,543,420 kg of turkey meat, with farm gate sales of over $50 million. Production is located all over the province and there are over 10 farms producing Free Range and Organic turkeys. All other growers produce free run turkeys inside temperature controlled barns. All turkeys are provided food and water 24 hours a day.

There are three mandatory on-farms programs in British Columbia that ensure a high standard of care for the turkeys we raise: the BC Biosecurity Program, On-Farm Food Safety Program® and the Flock Care Program®. The BCTA works closely with the BC Turkey Marketing Board and all industry partners to promote safe, quality and nutritious turkey products in our province.